Devils’ Kitchen at The Millhouse, Skidby 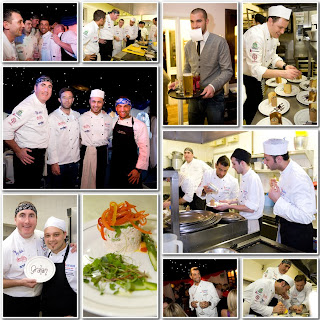 Last week saw me working with the Millhouse Restaurant at Skidby again. In conjunction with KCFM’s Smiles Foundation, Mark organised a fundraiser based around the idea of Gordon Ramsey’s “Hell’s Kitchen” and I was very proud to be asked to provide event photography coverage for the evening.

Local sporting personalities, business leaders and KCFM DJs went head-to-head preparing a 3 course meal for 120 guests who were being hosted in a marquee erected in the Millhouse’s grounds especially for the evening. The meals were served ‘blind’ to the diners who then voted on which meals they preferred and ultimately the guests were asked to pay as much as they thought the meal was worth.
Ian Ashbee and Bo Myhill, both of Hull City, represented the sporting fraternity; Graham Boanus (Power+), Ehab Allam (Allam Marine) and a representative from Santander Bank made up the business connection with Ed Bretten and Mike Reid, both from KCFM providing their culinary skills.
The kitchen was a frenetic, exciting and often dangerous place to be as the teams clashed head on to wow the palates of the diners and lots of practical jokes ensued – many bordering on sabotage! I was in the thick of it all night recording the story as it played out and the images I made really tell an amazing story of camaraderie all in the name of charity.
The night raised a total of £30,000 for the Smiles Foundation which this year is supporting 2 local charities – House of Light and Downright Special.
Hats off to all involved for a really successful evening of food, entertainment and amazing fundraising.

For more information about any of our Wedding, Commercial, Family, or Headshot photography, simply drop us a line or give our studio a call on 0800 5420611.